The Sound Heard Round the World: How Contact Centers are Transforming Veteran Care 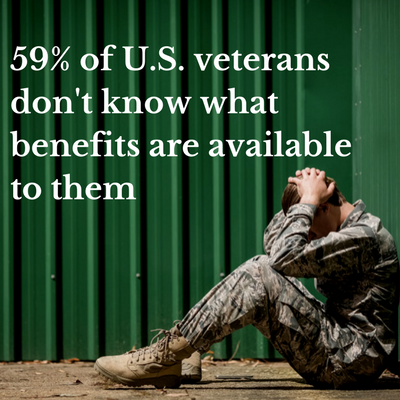 Contact centers are widely recognized as the centerpiece of unified communications solutions to improve customer service quality and agent productivity. However, these tools and resources aren’t limited to just improving customer and agent experience alone. Contact centers around the nation are using these innovative communication tools to improve quality of life, and in some cases save the lives of American veterans.

The Current State of Our Veteran Population

As of the last census conducted by the United States Census Bureau in 2014, there were 21.8 million veterans of the U.S. armed forces. Sadly, over 15 percent of this veteran population (1.4 million) is considered at-risk of homelessness due to poverty, lack of support networks and substandard housing. In addition to homelessness, many veterans live with the lingering effects of post-traumatic stress disorder (PTSD) and substance abuse.

With such compounding issues facing our most heroic citizens, many veterans become overwhelmed and lose hope for the future, resulting in a large number of suicides. According to a Veterans Affairs Report titled, Suicide among Veterans and Other Americans, an average of 20 veterans died from suicide every day in 2014.

Despite a variety of resources available to the veteran population, many do not know how to access these benefits. In the most recent National Survey of Veterans, only 41 percent indicated that they understood their general benefits, which means a staggering 59 percent of U.S. veterans do not know what benefits are available to them when they need them most.

Fortunately, modern contact centers play a large role in preventive care and have the ability to transform veteran healthcare.

Veterans facing challenging times often encounter even greater obstacles when trying to reach the proper care resources. This can mean waiting on hold, frequent transferring between departments or manually searching online without tangible results. Contact centers continue to make it easier for veterans to reach the right person or access proper information in a timely manner. By simply dialing a number or sending a text message, veterans are more quickly connected to the immediate care they require.

Equipped with a unified communications toolbox at their fingertips, contact center agents are uniquely positioned to match sought-after resources to a veteran’s individual needs. More importantly, they’re trained in lifesaving techniques to talk a veteran through an immediate crisis, including suicide prevention. However an individual is comfortable seeking care, highly skilled agents are accessible 24/7 through a multitude of communication methods, including voice, video, text, SMS or web chat.

Implementation and Hope for the Future

Contact centers that are equipped with the right technology for answering and facilitating inquiries have a significant impact on the veteran population. To highlight this point, in 2016, the Department of Veterans Affairs dedicated a new call center specifically for its veterans’ crisis line. In just one year, the VA reported that the crisis line answered 510,000 calls, responded to 53,000 online chat requests, 15,000 texts, and dispatched emergency services 12,000 times to veterans, service members or their families. Most strikingly, with the ability to answer inquiries quickly, contact center agents were able to make 86,000 referrals for veterans or service members to seek aid from suicide prevention experts.

On a legislative level, solutions such as a proposed bill titled, The Veterans E-Health & Telemedicine Support (VETS) Act of 2017 (H.R. 2123), are being pursued to ensure that veterans have access to telehealth technology. If VETS is passed into law, it would grant many additional veterans access to needed telemedicine services, especially focusing on those individuals located in rural communities.

Transitioning from military to civilian life is a daunting process for thousands of U.S veterans every year, but with contact centers leveraging the right technology to aid those who struggle, we can finally serve those who have so patriotically served us.