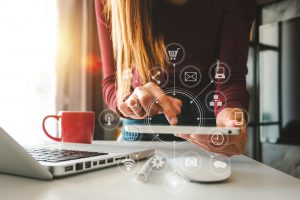 According to Worldometers, the world population is approximately 7.75 billion. While each of these individuals may have different views, careers, hobbies and priorities, they all desire one thing: access to healthcare. In a society that has been heavily influenced by the advancement of automation and digitization, however, access to healthcare isn’t the only concern. This sector in particular faces tremendous pressure to also meet increasing patient expectations with regard to communicating with their doctors — regardless of which channels they prefer to use.

The ultimate solution for integrating patient/doctor communications lies in cloud-based omnichannel communications access. Without omnichannel, compiling an ongoing conversation across all various mediums can prove a technical nightmare, to say the least. To better explain how omnichannel functions, compare it with a term that has received a lot of attention in recent years — blockchain.

In comparing blockchain and omnichannel, consider first what blockchain is, where it came from and how it’s been applied.

Blockchain was originally invented by Satoshi Nakamoto in 2008 as a public transaction ledger of the cryptocurrency bitcoin. The concept allows digital information to be distributed, but not copied, via a time-stamped series of immutable records of data managed by a cluster of computers (as opposed to just one). Each of these data blocks is secured by cryptographic principles, also known as chains. Once a block is added to an existing chain, all data can be seen by anyone with viewing access to that chain. The data manages to be kept secure since each block is verified by thousands of computers and added to a chain with unique records and history.

Just as blockchain works to increase efficiency and effectiveness, cloud-based omnichannel communications similarly streamlines and integrates interactions across all possible channels (i.e., phone, web chat, text message or video visit). This allows healthcare facilities to prioritize the most pressing patient needs and give their stakeholders the convenience of different modes of communications to get in touch. Other examples of juxtaposing an omnichannel approach to call center tech with blockchain include:

Ultimately, omnichannel call centers are the way to go when providing doctors, nurses and clinicians with a communications network that emphasizes speed and efficiency in speaking with patients — which is especially vital when someone’s life is on the line.

As a new decade approaches, healthcare leaders need to consider adopting the latest communication technology to ensure they can provide the best user experience and to maximize their operations in a world with continually shifting expectations and trends.