Can You Hear Me Now? How UC, Big Data are Transforming Healthcare 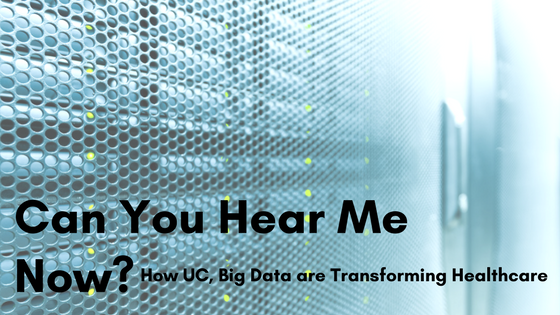 Healthcare in 2017 has almost become synonymous with certain buzzwords and trends: digital transformation, virtual visits, patient engagement and big data. While it’s common to see these terms thrown around in medical journals, whitepapers, news articles and more, it’s important for providers not to turn a deaf ear or become desensitized. Each of these trends show just how far the industry has come in its approach to delivering care.

In the early 1990s, when personal computers first started becoming more affordable and the internet emerged, the Institute of Medicine made the case that by 2000, every doctor’s office should use computers in their practice to improve patient care. This innovation radically shifted a field that largely hadn’t seen change in its administrative processes for centuries. Suddenly, there were new ways to approach patient communication, appointment scheduling and the keeping of patient records. Though the first electronic health record (EHR) system was created back in 1972 by the Regenstrief Institute, it was only mainly used by government hospitals and those exploring the edges of innovation due to its high cost. In the ’90s, the internet set the stage for web-based EHR systems – but it’s only now, 20 years later, that widespread adoption of EHR systems is taking place throughout the U.S.

According to the U.S. Office of the National Coordinator for Health Information Technology, the adoption and “meaningful use” of EHR systems has steadily increased year over year from 2008 to 2015, jumping from 9.4 percent adoption of basic systems in 2008 to 83.8 percent in 2015, and 96 percent overall adoption of certified EHR systems. Even in rural areas, where the latest technology tends to trickle in over time, by 2015 at least 8 out of 10 small, rural and critical access hospitals had adopted at least a basic EHR system.

So why does this matter for unified communications?

While EHR adoption has reached almost full market penetration, the ability of these systems to collaborate seamlessly with those of other institutions to provide a 360 degree view of a patient’s history is still being worked out. Providers are also struggling to pull the most pertinent information from decades’ worth of electronic file notes.

Despite the growing adoption of these systems, the resulting patient engagement potential has a long way to go, and unified communications (UC) can help.

In the age of big data and analytics, few would argue against the value of the insights revealed and how they can be leveraged for continued transformation. In healthcare, this transformation can be seen in the way a patient is cared for and the treatments prescribed as a result of the analytics revealed through an EHR analysis.

For example, as more patients interact with their provider portals — to access test results, communicate with their providers via chat or schedule appointments (in person or virtually) — the UC data gathered can be used to build patient profiles listing their biggest areas of concern or health monitoring, how often they engage with certain features and how long they engage with them. This can help hospitals better innovate in the areas most used by patients and to staff certain areas of support during peak times of use. Now, hospitals can meet their patients exactly where they are with the tools they’re looking for most.

Not only this, but as EHR technology and data analysis continue to evolve and improve, it will be important for doctors to be able to see overall trends at a glance while meeting with a patient in-person or via a virtual visit. However, the information housed within an EHR is only as useful as the way in which it’s communicated. That’s why it’s so vital for information sharing to be easily digestible and timely, creating further opportunity for UC tools to impact healthcare’s future.